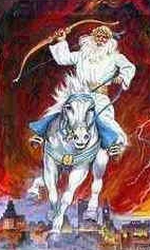 When the First Seal is opened by the Lamb, the forerunner of the coming Messiah, the white horse rider with crown and bow, is sent out first, before all the rest of the seals, trumpets and woes of Revelation are released upon a world spiraling headlong into pre-tribulation mega-crisis. Friends, we’re there!

And I saw, and behold a white horse: and he that sat on him had a bow; and a crown was given unto him; and he issued forth conquering, and to conquer.
Rev 6: 2

Where does this figure of a victorious rider originate?

What does this rider have to do with the remnant of Israel?

Note from host: Dawn and I pray before we record each program. While I was praying for this program Dawn had a vision. The mic happened to be on and comments about the vision were recorded. I have included this candid clip at the beginning of the extended version of the program.