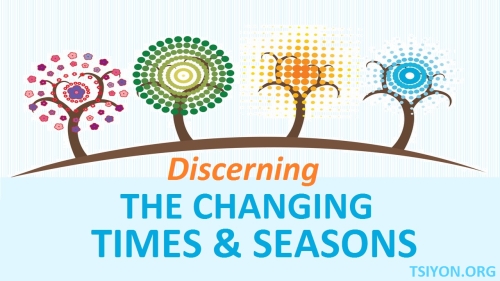 As the birth pangs of this end-time generation increase it is tempting to look for an early return of Messiah. Some expect the “Rapture”, the Greater Exodus, or even the Great Tribulation, before 2018. This WILL NOT happen, since the underlying reasoning pointing to this date is faulty and will lead to disappointment. This begs the question: can we accurately discern the times and seasons of end-time events? Tsiyon Partners can view this live presentation tonight at 8 CST here: Tsiyon.net.

Listener Email Question:  “Today I opened an email teaching from YATI that shocked me! YATI claims that Yahshua was/is not human. Here’s an exact quote that I cut&pasted from the teaching of Rabbi Moshe Yoseph Koniuchowsky that YATI sent to me; Yahshua is not 100 percent YHWH and 100 percent man as most bible believing religions, or sects teach, but is 1 million percent YHWH and 0 percent man. He was cloaked with the features of humanity, BUT was not human in His flesh, spirit, or blood! I want to know: Does Tsiyon teach this too?”

Tsiyon Answer:  No, Tsiyon does not agree that Y’shua was not really a man, for obvious Biblical reasons. If Y’shua was not a man then He was not “Son of David.” If He was not “Son of David” then He could not be Messiah, since the Scriptures make clear that Messiah would be a Son of David and David, of course, was a man (Isaiah 11:1, Matt 1:1, Luke 1:32). Neither can it be said that Y’shua was merely “Son of David” in some sort of symbolic way, for the Scripture specifically says Y’shua “was born of the seed of David according to the flesh” (Romans 1:4). Actually, Y’shua’s favorite title for Himself was “Son of Man” emphasizing His true humanity. This is vital to all of us, because we are saved through the sacrifice of Y’shua as a perfect man. If He did not come as a man then we are all still in our sins. Y’shua on earth was known as Son of David – Son of Man – and Son of God. Tsiyon did a series of programs on Y’shua as each of these titles in the Spring of 2006. Anyone with questions about the topic should listen to all of those programs to better understand the identity of Y’shua in all dimensions. This Passover season we are rebroadcasting one of those programs that is especially appropriate which shows why Y’shua had to be a man to save us. This program is called “Son of Man Our Redeemer.”