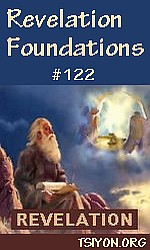 Right now there seems to be a hysteria about the dating of the end of the age. Current predictions for “the end” include 2008, 2009, 2010, 2011, 2012, 2013, 2014, 2015, 2016, and 2017. The truth is, none of these dates are correct. Though the end will come in this generation, it will come later than most seem to be expecting. By the time it comes most current believers will be sick of date speculations and will have given up on all such predictions. Many will have left the faith all together, thinking that prophecy has failed. That will not be true, but it will seem true to a majority. Here at Tsiyon, we don’t want you to be fooled! That’s why we are starting a systematic study of Revelation to help you discern the times we are living in. Don’t miss a single program!