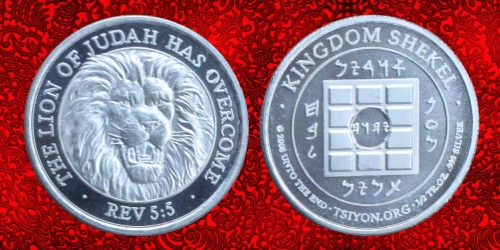 The Silver Kingdom Shekel has been designed and commissioned by Eliyahu ben David on behalf of Tsiyon. The design above (actual photo enlarged to show detail) was officially approved and an expert engraver was commissioned to create the dies needed to mint these Kingdom Shekel medallions. These approved and expertly created dies are now being used to mint the .999 fine silver Kingdom Shekel rounds shown in the photo above. Reaction of persons who have ordered these medallions fresh from the mint is beyond enthusiastic.

Q. Why has Tsiyon designed and commissioned the Silver Kingdom Shekel?
A. The Silver Shekel must be restored because Scripture calls for shekel-denominated fine silver to be used for a number of designated holy purposes. Minting of the Silver Kingdom Shekel insures availability for such holy use. Secondarily, a resurgence the global economic crisis is predicted. We believe that converting some of your rapidly declining currency into reliable silver of guaranteed weight and fineness is a wise and practical move. Since we cannot vouch for silver from sources we do not personally know to be honest and secure, we offer the Silver Kingdom Shekel for this purpose.

Q. What is the meaning of the design?
A. The unusual design commemorates events of this present prophetic period and is an excellent teaching tool for that reason. The obverse face of the Kingdom Shekel celebrates the overcoming Lion of Judah of Revelation 5:5 Who has taken the Scroll out of the right hand of the Father and has begun to remove its seals. The reverse face of the Kingdom Shekel illustrates the prophesied gathering of the faithful remnant of the Twelve Tribes of Israel into a unified Kingdom nation, manifesting the glory of YHWH in the Earth. Our Announcing Judgment Day book provides important background information from which these symbols have been drawn. Each of the elements illustrated on the Kingdom Shekel highlights important details of the prophesied end-time message. A comprehensive teaching about silver, and each symbol found on the Kingdom Shekel can be found in these radio messages:

NOTE: You can listen to all of these radio programs free on Tsiyon Road Messianic Radio or by registering and logging in to Tsiyon Tabernacle.

Why we need silver shekels:

Q. Is the Silver Kingdom Shekel legal tender?
A. No, the silver Kingdom Shekel is not legal tender. The modern legal definition of money is generally the same as legal tender. Generally such legal tender is fiat money, “money” that is such simply by decree of the state. “One of the standard methods for creating fiat money has been for the government to declare the banknotes of particular government-backed banks to be “legal tender” for debts. Such laws typically require that the notes be legally offered as settlement for all debts, and if refused, the debt is not required to be paid with other kinds of money. Such laws force legal tender notes to function as money in many important situations in the economy.” Realize that fiat money has no more intrinsic value than the paper it is printed on or the base metals it is usually coined in. Eventually every fiat currency devalues to its intrinsic value – zero. We call that process of devaluation of fiat money “inflation.” The more fiat money that is created out of nothing the less each unit is worth. For example, according to the US Bureau of Labor Statistics, the US Dollar has lost approximately 95% of its purchasing power since 1913. The 5% of value that remains is now heavily under pressure from war debt, the trade deficit, and the endless mounds of money printed every day to pay the trillions in “bail outs” that threaten to finally bury the US Dollar. [https://en.wikipedia.org/wiki/Fiat_money]

Q. Is the Silver Kingdom Shekel money?
A. As explained above, the silver Kingdom Shekel is not offered as money according to the modern legal definition of the term. However, in many cases modern English Bibles translate the Hebrew word for pure silver as “money” because in the Bible one is the same as the other. Silver has been recognized and used by the common man as money for over 4,000 years because of its intrinsic value, requiring no state decree to get people to accept it as payment. Silver is better than gold for common trade since it has traditionally been about 15 times more plentiful than gold. At about $1200 per ounce in today’s value, gold is too valuable to exchange for common goods – a bag of groceries for example. Silver of the same weight is just about perfect for that purpose, which explains why silver is called “money” in the Scriptures. When fiat money fails, silver emerges as king – unless you want to offer a wheelbarrow full of fiat currency – or a $1200 gold coin – for tonight’s groceries. Then again, you could cut the gold coin into fourths and pay only $300 in real value for your supper. Gold is great for storing value, but if you want to be prepared for a collapse of the fiat currency, then you will need to have adequate reliable silver on hand.

Q. If the fiat currency devalues to zero, can’t I just barter whatever I’ve got for what I need?
A. Maybe. However, have you seen all the garage sales lately? Have you noticed they all have the same old furniture, appliances, TVs and microwave ovens? Have you noticed all that stuff is selling for pennies on the dollar? When everybody else is trying to barter their old furniture, appliances, TVs and microwave ovens for necessities of life how well will you fair trying to barter all that same stuff? On the other hand, based upon 4000 years of history, if you have these beautiful pure silver rounds of a guaranteed weight and fineness stamped right on them you will likely find yourself in a much better position to provide for your family and to help other deserving persons.

Q. Is it a good time to buy silver?
A. After the market crash of 2008 silver more than doubled in value, sometimes outperforming gold, which is also rose rapidly. Recently, the US Dollar price of both gold and silver has dipped, which many people see as offering an excellent buying opportunity right now. Many experts say that silver is expected to rise several fold in value in the months and years ahead. These experts see silver as presently the best buy out there.

“Silver is a vital commodity to our way of life. Silver is a precious metal that is being trashed as an industrial metal. As a result, it is within years of becoming the first metal to become extinct according to the USGS. At some point the shortage is going to become so obvious, that people are going to rush to turn in their depreciating dollars for real silver money. That is just the monetary demand of silver, the industrial and strategic demand is another huge factor we should consider. Silver is a precious metal a monetary metal and an industrial metal. Industry alone requires over 900 million ounces each year. Silver has antibiotic antibacterial anti fungal and anti microbial properties. Silver is used in Dentistry Photography electronics Mirrors optics Medicine and in clothing. Silver is the best thermal conductor of all metals and The Best Electrical Conductor. Silver is also an important catalyst in chemical processing. As far as getting it out of the ground, that will take energy which seems to be only getting more expensive. China is now the world’s third largest silver miner after Mexico and Peru, and the world’s largest Silver refiner. Get in on the bonanza and get your physical silver today while it is still available at a affordable price. In the next few years you may loose your ability to get in on one of the greatest investments that will protect your financial security when the dollar implodes and economic chaos appears in your area – you will be happy you did. USA geologist society have predicted that Silver will be the first element of the periodic table to run out by 2020. Physical silver outperformed the mining stocks by 4 times during the last bull market. Only about 2% of COMEX silver contracts are actually settled by physical delivery, and the rest are settled for cash or rolled over. Decades of market manipulation has made silver the most underpriced commodity in history. Be thankful that you have realized this in time to capitalize. JPM and HSBC are behind the Big Silver Short. Get yourself some physical silver and take possession if you want any certainty of cashing in before the paper silver derivatives become worthless. The COMEX does not have the 103 million ounces they claim to have. …MAKE SURE YOU GET PHYSICAL SILVER IN YOUR OWN POSSESSION. Don’t Buy SLV, or Futures or Pooled Accounts or any other BS paper silver product. Remember anything on paper is worth the paper it is written on.” [Quoted from https://silver-shortage.blogspot.com/]

Q. How do I know these Silver Kingdom Shekel rounds are of excellent purity and weight?
A. Silver and gold are sometimes sold with a legal fine print disclaimer stating that weight and fineness of the actual order may fall within + or – 10% of the amounts stated. Even without any such disclaimer, newly minted gold and silver rounds often fall short when actually weighed with an honest scale. Then there is the problem of debasement of the precious metal by the addition of worthless base metals to the mix. Any such variance is not acceptable for holy purposes, or even for common trade, since YHWH demands honest weights and measures. It is because of such practices that Tsiyon is taking every precaution to insure that the hallmark weight and fineness values engraved on the round are the minimum standard of each round. Each round is guaranteed to meet or exceed that standard upon receipt of each round or the defective round will be exchanged at our expense for one that does meet the stated standard. Realize, this is a spiritual obligation we dare not violate. You absolutely will never find precious metals distributed according to a higher level of integrity than these silver Kingdom Shekel rounds. As a matter of fact, these rounds are not debased by the addition of even a trace amount of base metals, as are most so-called “silver” coins in circulation today. The purity of the silver of these rounds exceeds the known standard of purity accepted at the Temple in Messiah’s day by several percentage points! These rounds are minted from the purest fine silver – and nothing else.

Q. Will all of that added attention to quality affect the value of the silver Kingdom Shekel?
A. It takes more time and care to insure this excellent level of quality. However, the uniqueness and beauty of the design, inspirational value, and the fineness and guaranteed weight and quality of each of these silver medallions add value to this Kingdom Shekel.

Q. How do I buy Silver Kingdom Shekels?
A. We are now minting the Silver Kingdom Shekel. Right now, Tsiyon listeners can order directly through Tsiyon by mail. As you will see, there are substantial discounts for quantity orders. You may download the order form with price list at the end of this page.

If you have further questions, please include them in an email.

Log-in to the Membership Site

Your Browser Dose Not Support the HTML5 Audio Tag

The Popup should be Open ,

If you don't see the popup open then you may need to clear your cookies.